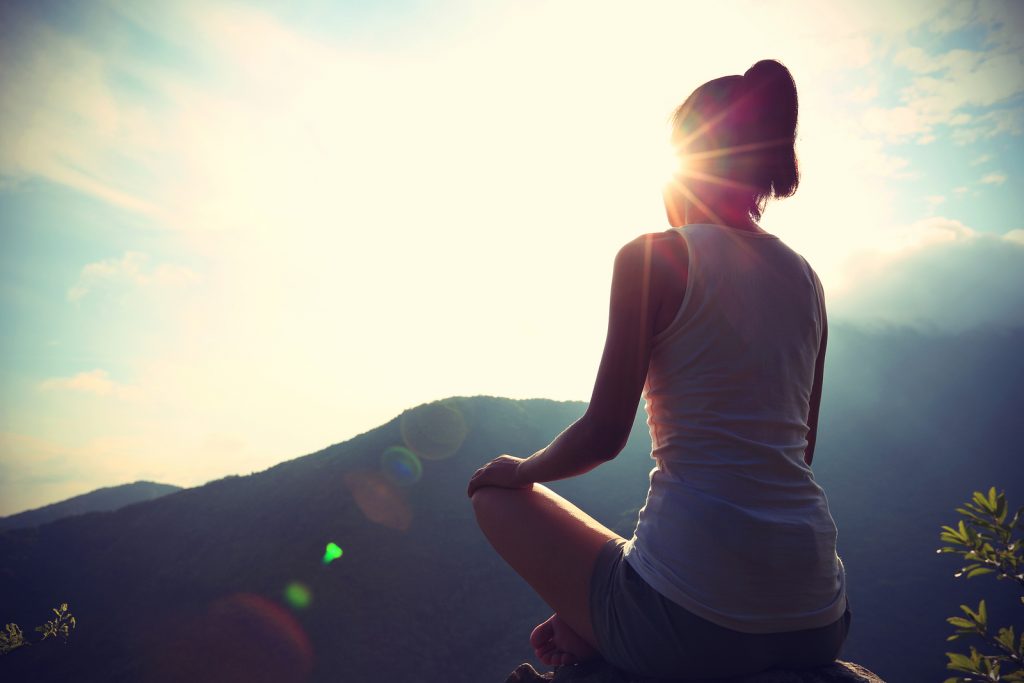 I walked into the yoga studio in a favorite running T-shirt and shorts: having run multiple half-marathon and two marathons, I was most familiar with this exercise attire. Several years earlier, I was exposed to yoga, but the postures and moments of silence were uncomfortable to me. But this time, it was 2002 and post-9/11. I was ready for something slower and possibly meditative even though I didn’t know what that truly meant.

The name of the instructor was Lindsey Levin, and I was immediately comfortable in the space. She was welcoming and warm, introducing herself to new students. As I recall, she described and demonstrated Mountain Pose, clearly articulating placement of each body part from toes and heels to shoulders head and the gaze of the eyes. It was not simply about standing upright on my two feet! She provided a similar level of detail for subsequent poses and walked around the room as she taught, providing adjustments to the students. She helped my alignment with Pyramid Pose, relaxing tension in my shoulders and leveling my hips. Being new to yoga, I appreciated her precise descriptions and adjustments.

I continued taking Lindsey’s classes wherever she taught in the city. I also wanted to learn more about yoga and bought many books – “Light on Yoga,” “Power Yoga,” and “Jivamukti Yoga” were a few. Through my growing library and practice I started to understand some Sanskrit terms and deeper levels of yoga were being revealed.

Lindsey’s vinyasa style encompassed the flow of yang, energy of Kundalini, holds in Yin and the healing from Restorative. As she spoke through each sequence, she brought us back to the breath – This is a breathing class first. You and your breath are partners. Find a rhythm of breath that can sustain you – and she consistently shared the message to honor one’s ability in the given moment. When we were in Side Angle Pose with an optional bind: Honor yourself. Yoga is not the pose. Yoga is how you are doing what you are doing. Bird of Paradise: Believe in yourself. Falling is the same as not falling. Can you believe in yourself even if you fall? She also played music that complemented the sequences – calming and centering, energetic and strengthening. Once when we were in Pigeon Pose and my body was extended on the mat with my head bowed down, “Wonder” by Natalie Merchant came on and my heart was touched when I heard:

I’ve struggled with self-esteem since my childhood, and with the help of my therapist, I was working on developing a stronger sense of self – integrating yoga powerfully reinforced those lessons. Lindsey’s background in law and psychology combined with her teachings of svadhyaya (self-study), satya (truth) and ahimsa (non-harming) resulted in a synergy of psychological and spiritual therapy for me. From 2002 through 2013, as I practiced with Lindsey twice a week at Moksha Yoga and yogaview, I was developing more trust, kindness, gratitude and love in my life. She guided me back to breath as I trained for marathons, adapted to work reorganizations, found and lost love and reconciled broken relationships. In her class I regained grounding when I fell into grief upon the deaths of both my father and mother in 2010 and 2012, respectively.

In 2013 soon after my mother’s death, I made the difficult choice to move to Atlanta, Georgia due to a work relocation. Leaving Chicago meant leaving my family, church and yoga communities – my support network – just as I was learning to accept that I could no longer pick up the phone to call my parents.  I faced giving up the healing practice with Lindsey. Being a student as well as an imperfect human being, I could not fathom letting go of her. How could I apply yoga to this additional loss of the only yoga I knew? Could I switch aparigraha (non-grasping) “on” like a light switch? I tried to remember that I had received many blessings in life and that God would provide consolation during my most challenging transition.

“Be patient toward all that is unsolved in your heart and try to love the questions themselves, like locked rooms and like books that are now written in a very foreign tongue. Do not now seek the answers, which cannon be given you because you would not be able to live them. And the point is, to live everything. Live the questions now. Perhaps you will then gradually, without noticing it, live along some distant day into the answer.”  – Rainer Maria Rilke

I somehow breathed through my tearful good-bye and moved to Atlanta. As I searched for yoga studios, as expected, I found no Lindsey. I continued seeking and I discovered wonderful yoga studios here and have met teachers with various styles and endearing personalities: Astrid, who exudes positivity and closes with touching reflections by spiritual writers; Cheryl, who teaches Kundalini and lightheartedly reminds her students to laugh, sing and dance; witty and equanimous Doug, who teaches vinyasa, Yin and Zen; Veronica, who encourages her students to the edge; Meryl, who translates yoga into life lessons like presence while sitting in traffic and her experience of raising a toddler.

I met several of these teachers at Evolation, which is only a few blocks from my office. On my first visit to the studio, I was greeted with a smile and my mind was quieted in a flow class. I returned, as the introductory student offer gave me a chance to experience a variety of classes. At Evolation, I can breathe through a heated or non-heated flow with Veronica, Hadji, Amanda or Rachelle. It is where I was first introduced to Barkan with Ashley. And when I’m seeking longer holds in poses, I relax my muscles in Doug’s Yin class. I find that my practice at Evolation has even more room to grow because workshops with difference focuses are offered. There are still teachers who I haven’t met who share the beauty of the practice. After the difficulty of my transition to a new city, I am deeply grateful to have found this community.

Aparigraha means non-possessiveness, non-grasping, non-greediness and it relates to all things; it means trusting in oneself and that God will continue to provide. Extending the concept to people with my own interpretation, if I let go, I not only give someone freedom – I can also be present to the light in another.

Lindsey helped me build and strengthen the roots of my practice and she nurtured my ability to believe in myself and in love. I return to her grounding, expansive and soulful class each time I visit Chicago. I embrace her with my deepest love and gratitude, then do my very best to let her go and welcome the next moment and God-given light wherever I am.

Rachel Alarcon manages the Evolation Yoga Facebook and Twitter accounts. She resides in Atlanta and works in telecommunications. She is inspired by oceans, mountains, yoga and the light in others.

Honoring Your Body with a Morning Yoga Routine